COOINX – the power turbo in the “wee” marketplace

Premiere of the COOINX-University: Mood barometer of the 500 guests oscillates between that of a pop concert and a lottery win

“Nomen est omen” – this Latin phrase (“the name is a sign”) was used by the Romans and throughout the Middle Ages – it is even general parlance now in the 21st century. These days, you might say: “The name is app-ropriate!”

Holding the event at the Hotel Leonardo was no co-incidence: its name is immediately identifiable with the greatest polymath of all time – Leonardo da Vinci – the brilliant Italian painter, sculptor, architect, anatomist, mechanic, engineer and natural philosopher. The smiling Mona Lisa, the best-known and most valuable image on the planet, is undoubtedly his magnum opus and even today, it attracts crowds like a magnet to see it at the Louvre in Paris. In the past, today and likely for the next 1,000 years, Leonardo moves the world like no other. His ideas and oeuvres have changed the world, in terms of thought and action!

More quality of life for people
COOINX’s message is: THE FUTURE STARTS NOW! And today is the day to present, to illustrate, to prove, how this ambitious message can be recorded for posterity with numbers, data and facts. The company is new – but not lacking in self-confidence – as represented by founder and CEO Michael Scheibe: “Of course, we don’t want to compare ourselves to the genius of Leonardo of the Renaissance, da Vinci or Michelangelo. But with all modesty, caution and humility: COOINX will shape the future of our planet. It will make considerable changes – for the better. I’m a thousand percent convinced of it.”

“Nomen est omen!” In many respects, this was particularly relevant on Saturday, September 8, 2018, when the first COOINX University premiered! First in Germany. In Europe. Worldwide. Just before 10:00 am, the first “fans” – excited and in high spirits – stood in front of the ballroom doors at the Leonardo Royal Hotel Munich. The queue got longer by the minute. Smalltalk in English, Slovenian, Slovak, French, Italian, Dutch, Croatian, German, Swedish, Serbian… A good mood all round. Anticipation! 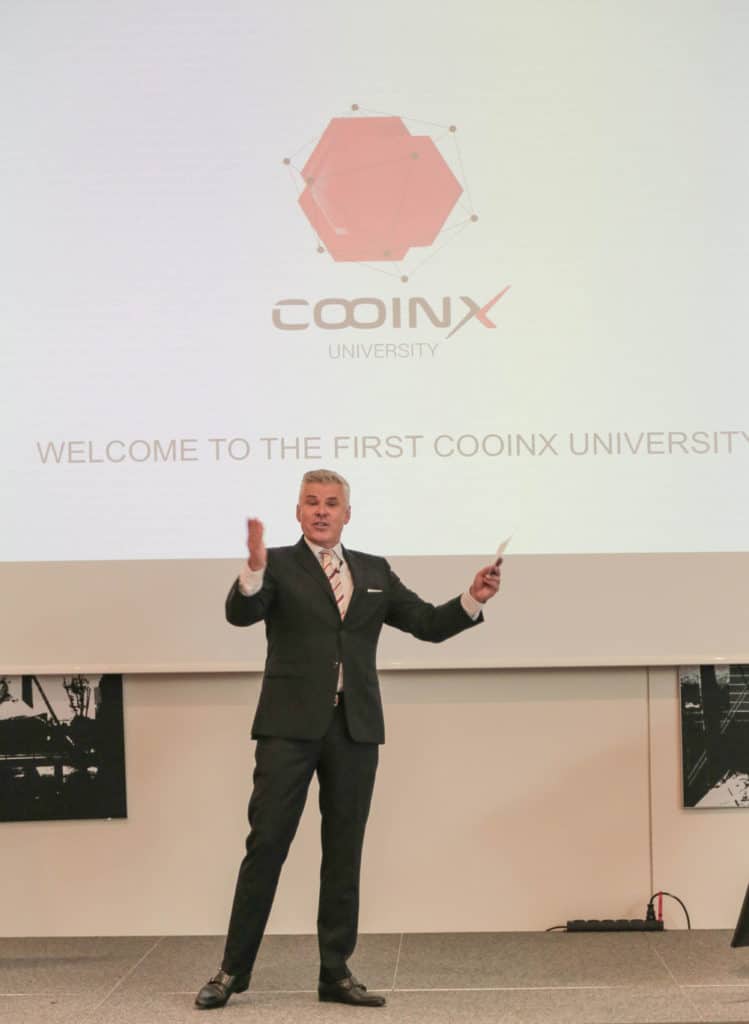 Full of enthusiasm and conviction: everyone pulls together
At 12.30 pm on the dot: ardent, uninterrupted applause! Then standing ovations! COOINX founder and CEO Michael Scheibe sprints onto the stage, welcomes the “fan base” from far and wide across Europe, Malaysia, Ghana, Panama… A full house! 500 special guests, who had each invested 139 Euros (net) to be a part of it… 500 mega-motivated partners, 500 excited fans who managed to strike it lucky when tickets went on sale, as over 2,500 ticket inquiries were made all over the world…

Michael Scheibe is the much-celebrated star of this international sales meeting. On stage, he speaks German and English simultaneously… His friend and source of inspiration, Cengiz Ehliz, the COOINX partner’s first guest speaker and “wee” product provider, is the undisputed “mega pop star” of this event.

COOINX was designed to be THE effective sales machine for the implementation of Cengiz Ehliz’s vision, to invigorate the “wee” marketplace in Europe and around the world. COOINX, with its 8,000 intended resellers, has set itself a target: “As a Luxembourg marketing and distribution company, we sell software that connects 1 million retailers worldwide to the ‘wee’ cashback system. That’s our job. Our business. Our passion.” 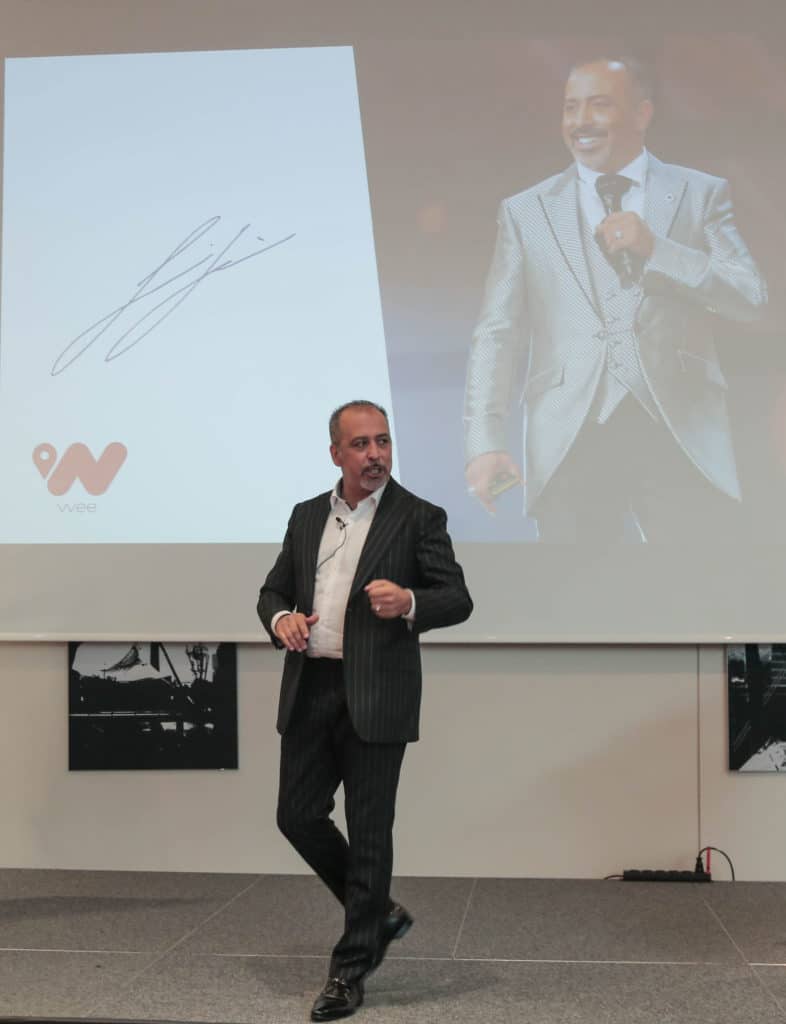 “wee”: Our ICO is based on sustainable foundations
Swiss Prof. Dr. Leo Schrutt, formerly a top banker and recently made chairman of the board of Kreuzlinger Swiss Fintec Invest AG (formerly wee.com AG), then does us the honour of presenting the core message as a motivation piece for the COOINX fan base – after the successful IPO (initial public offering) last year, the next quantum leap is on its way for “wee” and all of the stakeholders involved… The ICO (Initial Coin Offering)! Unlike all other comparable ICO’s, past or present, whose accumulated capital has sometimes been somewhat dubious and filled with “hot air”, the ICO for “wee” will be successful thanks to its reliable and transparent strategy, and its unique product. In the future of global payment methods, cryptocurrencies with blockchain technologies will take an increasingly dominant place. And the “wee” token, with the value of one euro, will hereby take pole position among other payment systems and alternative currencies! As part of the capital market strategy, there will be two “wee” tokens: one for businesses, the weePayCoin (1 “wee” = 1 euro = 1 “wee”-token) as a “stable coin” that can be actively used in the real market and one for the crypto exchange market, the ICO token. This “wee” ICO token is then a volatile, speculative token. The growing usability of this limited-edition token will gradually increase demand for it. And from this perspective, what could be better than a crypto-based credit card? The ICO will be accompanied by established consultants, such as PwC Switzerland and Swisscom Blockchain. 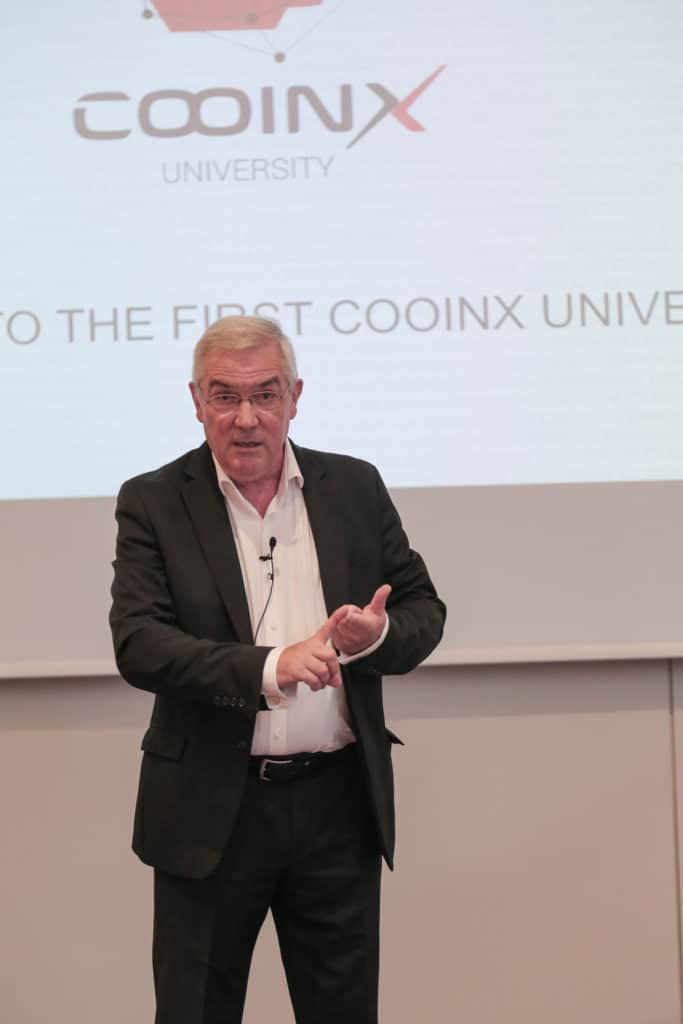 COOINX: A driving force for “wee”, with a fascinating incentive program for partners
The goal of all businesses under the umbrella of “wee” and its distributors is the digitization of retail. The undisputed USP (unique selling point) of “wee” is therefore its external distributors.

Multi-level marketing, according to one presentation, is currently making $190 billion in sales revenue globally, a growth of more than 100% over the last 10 years – motivating assurance for all sales specialists who travelled to Munich. Even more motivation and incentive for the COOINX sales force: Michael Scheibe has already reserved a billion “wee” tokens – for 10 million Euros from the “wee” ICO-SBP (early investment agreement) – for his international sales team. Each individual employee now has the chance to participate in the successful ICO for the “wee” within the framework of incentive programs, in line with their personal commitment and individual achievement of goals. So, within the framework of such regulations, these “wee” tokens will then be given away as an incentive to successful partners.

COOINX’s new COO, Mirko Scheffler, spoke about the comprehensive “wee” ICO participation incentive program, which began on September 1: “It’s time to collect weeTokens; never again will it be so easy! It shouldn’t pose any real problem for anyone here to put more than a million weeTokens in their wallet”, he explained, to rapturous applause. The competition is open to partners until October 1, 2018.

Competence is knowledge plus experience
The godfather of multi-level marketing, Michael Strachowitz, gives a unique insight into his 40 years’ experience as a sales professional and coach. Linked to this: an event-related Network Marketing Coaching for all partners. Starting with fascinating information about global trends, demographic laws and general regulations for Network Marketing as a second pillar in working life, each partner took practical guidelines away with them that will help to translate their goals into comprehensible work processes, with a view to a successful outcome. Excellent knowledge has been imparted, in terms of the COOINX individual career plan – now everyone must gather experience for themselves, in order to build up the necessary competence as a leader and implement it successfully. Their credo: Network Marketing not only offers money, but a great quality of life, too. But: “Only the strong survive.” Why? While it is true everywhere that “There is no such thing as a free lunch!”, it is in Network Marketing that this message – more or less an industry service commitment – is most significant. It is those who really want it, and indeed enjoy it, who will actually have the best chances of earning money, who will be really satisfied and happy.
With regards to COOINX, his final message is: “Ladies and gentlemen from Europe and around the world: Congratulations – you are in the right place at the right time!”

Dig in, people!
Yours, Michael Scheibe
And the COOINX-Team